Why the Fetes de Bayonne?

The beauty of a trip to Fetes de Bayonne in charming southern France is that it requires very little preparation. What do we mean?

Well, you need just one outfit because everyone wears the same and you’re unlikely to sleep for five days, so just pop a toothbrush in your white pantaloons, don the obligatory red scarf and join over a million revellers in a sea of red wine and rich Basque tradition! 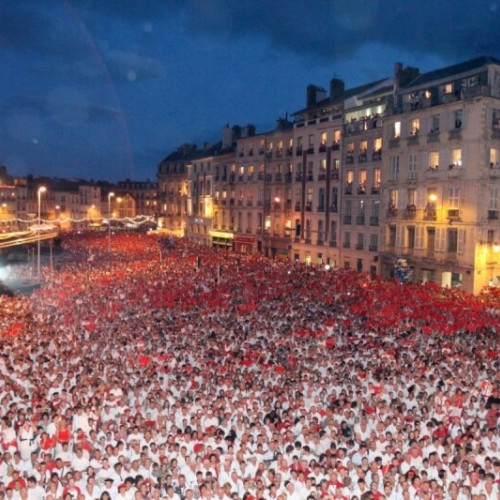 Actually, a pair of running shoes would be handy for when you’re racing bulls down narrow medieval streets into the city bullring! If you make it out in one piece, take a well-earned swig of sangria from a goatskin flask and join one of the many marauding troupes of drummers and dancers that fill the cobbled streets late into the night.

A Celebration of Bayonne.

Bayonne lies just ten minutes from Biarritz and the rugged Atlantic coastline, thirty minutes from sun-scorched northern Spain and the same distance to the unspoilt beauty of the Pyrenees mountain range.

Like Bayonne itself, the festival is imparted with the flavours of its neighbours but is something altogether unique. The wine-drenched shenanigans have been a testament to the region's uniqueness since 1932 when a group of proud locals created a party to rival that of San Fermin in Pamplona, which was stealing all the press at the time!

We think they outdid themselves so salute to them and cheers to making it out of that bull ring alive!