Have you ever sat in a restaurant itching to unleash decades of pent-up “don’t play with your food” conversations from childhood?

I’m not talking flicking a garden pea into someone’s wine glass; think instead Hulking out with the salad cart, spraying the place with ketchup and hurling ham at the repressive regime that is table manners. It’s OK, this is a safe place to admit your urges. Whoa whoa, before you reach for the olives let’s get you off to La Tomatina in BuÃ±ol, Spain for the world’s biggest food fight… 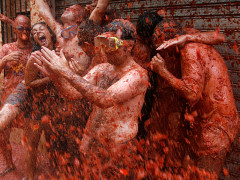 A Greasy Pole, A Leg of Ham and 100 Tonnes of Tomatoes.

With neighbouring Valencia long renowned for its beautiful Mediterranean oranges, the little town of BuÃ±ol felt somewhat like a neglected sibling and has gone to extreme lengths to draw attention to their sun-ripened tomatoes.

Each August, trucks laden with over a hundred tonnes of toms roll into town. Before the madness kicks off an official adjudicator strategically places a leg of jamon atop a greased pole to bait the hungry mob that line the quaint BuÃ±ol streets.

Granted, it all sounds a bit odd but as a wise man might have once said, “in the name of unique and unforgettable experiences, throw fruit at your mates” and who are we to question such sagacity?

While being pelted by water cannon, it’s a group effort to grab said ham from said greasy pole and then bang goes the starting gun as 20,000 participants turn the streets of Bunol into tomato soup!

As well as the main event, the weeklong fiesta features a suitably giant paella cooking contest, dancing in the streets and the age-old drinking game of dodging fireworks!