ItalyJul
Trip of a Lifetime

‘Il Palio’ as the locals call it, is even more of a reason to visit Tuscany than fine wine and picturesque countryside, not least because it only happens once a year.

If you want to be in the thick of the Palio di Siena, arrive in Siena well ahead of show day to eat, drink and strategize yourself into a frenzy alongside passionate locals from seventeen districts who have been going head to head since 1644, with no interruption from health and safety officials and other professional killjoys.

Would you believe that a married couple who hail from different districts will separate for days leading up to the race to focus solely on their districts runner? Imagine leaving the missus for a week to go away with the lads before a Cup Final! 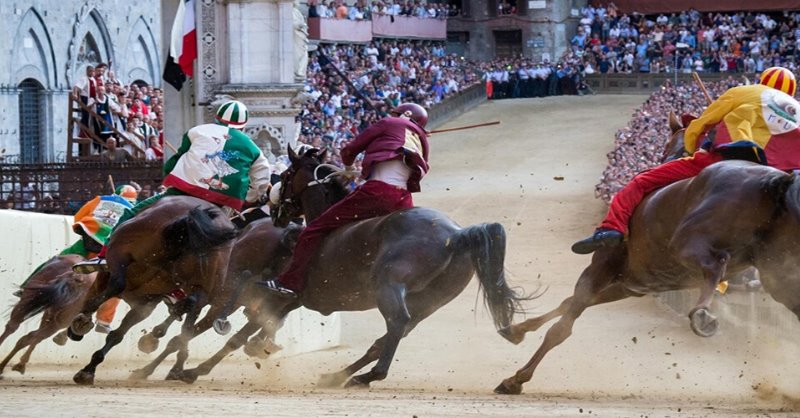 Having arrived in the iconic Piazza del Campo well ahead of the starting gun to ensure you’re shoulder to shoulder in the track-side pen, witness a boisterous face-off between jockeys vying for prime position, before the race erupts and the horses stampede around the dirt track like something out of Gladiator, if the Romans wore bright jerseys instead of chainmail.

As I said, Palio di Siena has been left to its own devices since Medieval times, so should a jockey find himself airborne and horseless after a tight corner the race will most certainly not stop- this is survival of the most committed, maddest and to a degree luckiest of Sienese.

We've teamed up with a premier Sienese tour group for a handful of Campo apartments overlooking the majestic central plaza, a stone's throw from the action but also a welcome retreat after the race.

Before we transfer you to Palio di Siena