The Rickshaw Run: Adventure Of A Lifetime

That's not a rhetorical question. We want to know if you're just a little wee bit out of your mind. Because for the Rickshaw Run, being ever so slightly insane is something of a prerequisite. 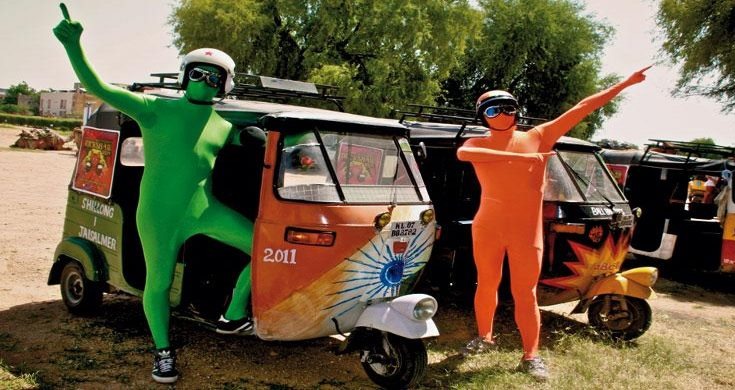 What is a rickshaw run, you ask? Hint: it's not what you might think it is — aka, being shuttled languidly through the streets of Beijing as you fan yourself gently and occasionally stop to take photos of the sights.

No dude. This rickshaw run is altogether more daring. Indeed we might even dare to say 'disastrous'!

Because the event's tagline is "Three wheels of disaster rolling across the globe", and that about sums it up. It's a 2000km trip through unpredictable terrain..... in a tin-can on wheels.

If you want to know what happens when you attempt to drive a rattly 7 horsepower vehicle across Sri Lanka, India, or The Himalayas, we’ll tell you. You’ll get lost. You’ll break down. You’ll wonder what the hell you signed up for. And you’ll love every minute of it.

In the ten years that the Rickshaw Run has been around, rickshaws have broken down over 15,000 times, and - get this - 87 people have ended up making a hospital visit. So uh, yeah. It's a disaster all right. And that's exactly what makes it so charming!

All the craziness is not without purpose, by the way. The Rickshaw Run has raised millions of dollars for charity. Another reason to sign up.

Oh yeah — and there’s a huge, raucous, unforgettable party at the end of it (naturally)!

So, ready to get your crazy wings on and go for the adventure of a lifetime? It’ll be worth it: because, boy, will you have stories to tell!