Sleep in the clouds at Yupinglou Hotel, China

Sleep in the Clouds at Yupinglou Hotel, China

To experience the full ethereal atmosphere of China’s Huangshan mountains you really ought to stay in a suitably otherworldly hotel like Yupinglou. Think Crouching Tiger, Hidden Tourist!

Can you imagine the look on the foreman’s face as he mulled over the architect’s ambitious plan? yet, like Kevin Costner learned in Field of Dreams: “if you build it, they will come”. Well, now you can come Sleep in the Clouds at Yupinglou Hotel, China, too! 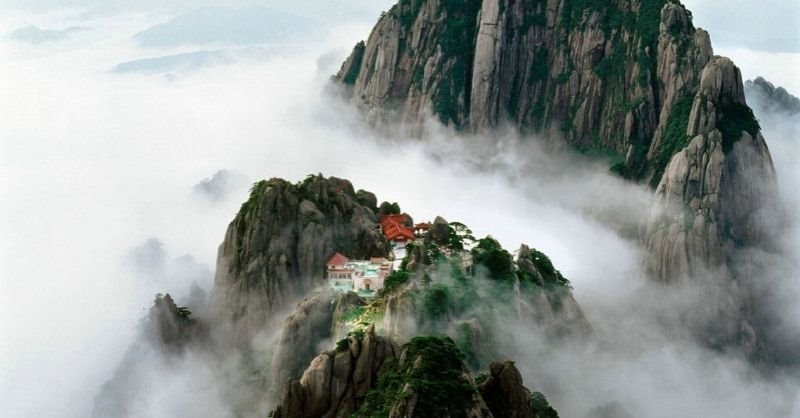 Boasting a splendid history of literature and paintings and the world-famous greeting pine, the highest star-rated hotel in eastern China welcomes guests from across the world. With Tiandu peak in north, lotus peak in south, Yuping peak in rear and the greeting pine in the front, this heavenly hotel enjoys an unparalleled natural landscape. What’s more, thanks to a natural viewing platform, Wenshutai.

The first to rave about the Huangshan mountain range way back in 747 AD was none other than legendary ancestor to the Chinese, ‘Yellow Emperor’ Huang Di. So powerful are the energies coursing through the fairyland of Huangshan Mountain that old Huang Di transcended to the state of supernatural being whilst holidaying there, or so they say.

We can’t guarantee that you’ll depart the earthly realm and wind up drinking tea with the Yellow Emperor but as you hike the stunning ranges, film time lapses of ridiculous sunsets and bask in hot springs like Nat Geo monkeys you certainly feel withdrawn from the world below and all its human drama.

Apparently, Huang Di literally became younger after bathing in the so-called Springs of Youth but please don’t be disappointed if things don’t go the same way; a mineral detox in a thousand-year-old spring is still pretty amazing!

Trip of a Lifetime
May

Trip of a Lifetime
Dec - May

Before we transfer you to Sleep in the clouds at Yupinglou Hotel, China